Selecting a smoke damper for a London basement was a simple task when I started working at Actionair 6 years ago. The damper was selected to provide smoke control for 2 hours at 300oc. They were always provided with a thermally protected actuator, and could be mounted in a myriad of different arrangements, which were assessed to BS476-20, and approved by the building control officer.

Not unlike the Galapagos Islands, the unique nature of the London basement; with its multiple levels, sprinkler systems rooms, and complicated smoke zones, has developed unusual solutions particular to its environment. Evolution is the ultimate form of product development, and without the encumberment of CE marking their product, UK manufacturers honed their smoke damper offerings to the specific nature of the market.

Then, in 2017, the horrific event of the Grenfell fire happened, making the prism we all viewed fire safety in shift from pragmatism to compliance. Rightly, we all looked at every aspect of the industry, and not surprisingly the deficiencies were exposed. CE marking offered the client, building insurers, and authorities a definite and tangible guarantee of performance and quality, and the industry now looks to use a CE marked product wherever possible.

CE marking for fire and smoke dampers was adopted in Europe from 2003, which we followed in the UK 10 years later. For a lot of reasons, the market generally chose to avoid CE marked dampers in basements, and as an industry carried on with the tried and tested basement smoke dampers we had been using for the past 25 years. Inevitably, this caused a problem. CE marking only certain aspects of a system, such as the ductwork, is meaningless without overall compliance, so the dampers amongst other products were soon looked at as a weak link in the chain of conformity.

Specifiers looked to Europe for solutions. To CE mark a smoke damper means that the damper has to pass the rigours of the test standard 1366-10 and conform to BS EN 12101-8. Unfortunately, 1366-10 is a very complicated standard and contains a myriad of sub-standards and conditions, which makes specifying the right product difficult at the best of times. Generally the specification can be broken down to two types of damper:

The standard also throws out some very different control actions from the dampers previously used in the UK for smoke extraction:

In my opinion, a drive to compliance is a good thing, and to be encouraged. However, as an industry, we must not lose sight of the solution we are trying to provide. The London basement is a very specific environment, and a blanket application of either a 1366-10 AA or MA damper might not provide the client with the desired solution.

AA dampers will open or close on receipt of an alarm, but potentially the unprotected actuator will be damaged in a fire, and the need to clear smoke from all zones of the basement will be inhibited if there are multiple damper failures.

MA dampers however, do come with thermal protection on their actuators and in theory, can be triggered at extremely high temperatures (up to 850oc). Although, one could argue in the standard London basement with its mist suppression and sprinkler systems, this is unnecessary.

We have chosen a slightly different path - one that suits nature of the UK basement market. Looking at the historic nature of the BS476-20 damper, Actionair has tested their new SmokeCommand Damper to 1366-10 AA, but have also chosen to pass the HOT 400/30 test. This additional layer of functionality importantly demonstrates that the damper can be controlled for 30 minutes and/or up to 400oc. The damper comes with a thermally protected actuator, and will provide some of the familiar features of the ‘old’ style dampers used on thousands of London basement projects previously, but with the added benefit of being CE marked.

By following this approach, and not ignoring the lessons learned in the previous 25 years, we have brought to the market a CE marked solution that will satisfy the needs not only of the client but the industry as a whole.

If you have any questions or would like more information about Actionair dampers, please contact an Actionair specialist! 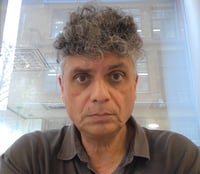 Peter has 25 years experience in working in a wide variety of HVAC companies. He has spent the past 6 years specifying fire and smoke dampers as well as control systems in the UK, and is now serving as a the National Sales and Specification Manager (South) for Actionair.

Our quick guide to smoke/fire dampers...

This article focuses on providing a brief overview of the key …

What is the difference between fire and smoke control dampers?

The control of smoke and containment of fire through the ventilation …