Approved Document B defines Fire Resistance as the ability of a component or a building to satisfy, for a stated period of time, some or all of the appropriate criteria given in the relevant standard. The resistance is a measure of certain criteria such as resistance to fire penetration, and is measured in minutes. The Fire Resistance is defined in the classification report which is issued by a third party (notified or approval body), and is based on testing that has been conducted against the relevant test standards. There are specific standards that cover classifications for different types of products.

Classifications for Fire Dampers are covered in the standard BS EN 13501-3:2005+A1 2009. Before looking at these classifications in detail, it is important to consider what a Fire Damper is. There can be various names that they are known by within the building services industry.

A Fire Damper is a damper that:

It should be noted that Fire Dampers are not Smoke Control Dampers, and we will be covering these in a separate blog.

Shown below is an example of a Fire Damper classification:

E = Fire resistance integrity of the damper. This is mandatory, and is expressed as a function of time in minutes.  It is determined by conducting a Fire Resistance test to BS EN 1366-2:2015.  Failure criteria includes the damper leakage going over 360m3/hr/m2, sustained flaming, or holes appearing that are big enough for a gap gauge to penetrate through.

I= Insulation rating of the damper. This is not a mandatory requirement to achieve a damper classification, but checks should always be done to determine if it is required for the end application.  As above, this is determined by conducting a Fire Resistance test to BS EN 1366-2:2015, and is expressed as a function of time in minutes.  Failure criteria are when one of the thermocouples exceeds 180oC above ambient, or the average temperature increase of all the thermocouples exceeds 140oC above ambient.

S= Low Smoke Leakage rating of the damper. This is not a mandatory requirement to achieve a damper classification, but checks should always be done to determine if it is required for the application.  As above, this is determined by conducting a Fire Resistance test to BS EN 1366-2:2015, and is expressed as a function of time in minutes.  In addition to the Fire Resistance test, you also need to conduct a damper blade leakage test on the smallest damper at ambient temperature to BS EN 1751:2014.  Failure criteria is when the damper closed blade leakage exceeds 200m3/hr/m2.

120 = This is the time (in minutes) of the classification, and is applicable to all of the criteria shown in the classification. There are set time categories as defined in the standard BS EN 13501-3:2005+A1 2009

ve = This shows that the damper can be installed vertically, i.e. in a wall.

ho = This shows that the damper can be installed horizontally, i.e. in a floor/ceiling.

10,000 = This shows the number of cycles that the damper has been tested to as defines in BS EN 15650:2010.  A cycle is defined as going from open to closed and back to open, or closed to open and back to closed.

Historically in the UK market, an ‘E’ classified damper, such as a curtain bladed fire damper would be considered a fusible link damper, as they traditionally would be fitted with a fusible link, and a ‘ES’ classified damper would always be considered an automatic damper. The problem with this approach is that the damper classification, and the method of activation are not linked; they are two separate issues.

It is possible in today’s market to get a damper with a ‘EIS’ classification, but with a fusible link.  This may not seem like a big issue, but you need to be careful when reviewing the requirement of Approved Document B or BS9999:2017.

For example in ADB section 10.16 states:

10.16 An ES classified fire and smoke damper which is activated by a suitable fire detection system (method 4) may also be used for protected escape routes

The methods are defined in section 10.12 of ADB

Where air handling ducts pass through fire-separating elements, such as compartment walls or the enclosures to protected escape routes, then the integrity of those elements should be maintained, using one or a combination of the following four methods:

Whilst an ‘EIS’ classified damper with a fusible link exceeds the requirements of being a ES classified, its release mechanism does not lend itself to being activated by a suitable fire detection system. It therefore should not be used for protecting an escape route. This situation could be resolved by either changing the method of activation to one that can be activated by a suitable fire detection system (if the design of the damper allows this), or by selecting a different damper.

Additional information can be found at: 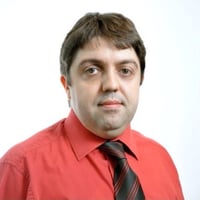 With over 20 years of previous engineering experience and 12 years within the building services industry, Stephen Gore has been Compliance Manager at Actionair by Swegon since November 2020.

A short guide to smoke/fire dampers...

This article focuses on providing a brief overview of the key …