It is often heard that "there is a lack of fresh air" in a room, but what is it that we mean? And how do we regulate ventilation to maintain a comfortable and healthy indoor climate?

The fact that we humans are most often affected when it comes to indoor climate by the temperature in a room, and often the comfort problems are mainly a temperature problem. But even when the temperature is at the right level, there are other factors that control how we experience comfort in the short term and how our health is affected in the long term.

The air around us consists of just under 80% of nitrogen, and about 20% of oxygen, and the term "there is a lack of oxygen" does not have much depth, instead it is the very last percentage of the air's content, consisting of, among other things, carbon dioxide and a number of gases that are interesting.

In order to set a measure of the indoor climate quality, the content of carbon dioxide, CO2 is often used as a guide value. But what are we actually capturing by measuring CO2 , and perhaps more importantly, what are we missing out on?

In these contexts, CO2 is a measure that is clear to communicate and easy to measure, and gives an indication of how many people are staying in the premises, and above all an indirect indication of other contaminants that accompany human presence, which need to be ventilated away. A CO2 content of 1,000 ppm or above affects our cognitive ability, with reduced opportunities to assimilate information and make strategic decisions. However, this level is far from dangerous for the human body. First, there are many times higher levels that affect our health, for example, levels around 30,000 ppm can cause headaches and it is first levels of 70,000 ppm that are life-threatening.

An alternative measure of air quality is VOC, an abbreviation for volatile organic compounds , volatile organic compounds. The term is a collective name for thousands of different substances that occur in our environment. An ordinary VOC sensor for ventilation systems captures substances that are emitted completely naturally from us humans, eg. acetone from our respiration and methane formed in digestion. This means that the VOC levels change in step with the CO2 levels, so both measures can be used to match the ventilation system's air turnover to the presence on the premises.

An important difference, however, is that the VOC sensor also captures a number of other unpleasant contaminants, which are emitted from objects and building materials, e.g. formaldehyde from paint, alcohols and aldehydes from adhesives and solvents, as well as benzene and styrene from copiers and computers. 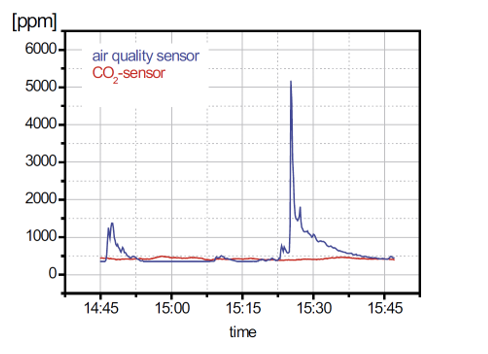 By regulating the indoor climate from the VOC level, the ventilation system can therefore increase when the occupancy rate in the premises increases, just like a CO2 regulating system, but it can also capture substances that are released, for example, when the premises are cleaned, the walls are repainted or a new sofa has been put in place. In these cases, the CO2 sensor does not give rise, and a CO2 controlled ventilation system therefore does not increase to ventilate the contaminants. A ventilation system that regulates at VOC will, however, quickly react and ventilate out of the room.

What is it that makes the VOC unable to replace CO2 as a measure of air quality? One reason is that the VOC levels are not measured in absolute ppm numbers in the same way as CO2 and thus are more difficult to set as limit values. The VOC donor captures thousands of subjects, and instead of setting limit values ​​for all of these substances, the VOC sensor is constantly calibrated to distinguish what is background level and what are changes, that is, the addition of contaminants. In other words, it is not as easy to set absolute limit values ​​for VOCs. However, in a modern system for demand-controlled ventilation, this is not a problem, the VOC level is simply converted to CO2 equivalent values.

So the question is whether we regulate what we should measure, or what we usually measure? If we want a good indoor climate, it is a lot that speaks for VOC as a measure of value!

Swegon's demand-controlled indoor climate system,  WISE, has a wide range of room sensors, including WISE IAQ, available in both CO2 and VOC designs.

Caroline Jacobsson is the product manager for Swegon's demand controlled indoor climate system, WISE. Caroline has a great interest in how smart systems can contribute to more efficient use of properties and increased well-being of those in them, in order to ultimately increase profitability.