The laws of thermodynamics tell us that heat will always move from hotter to colder areas. But the outside air, where the heat is to be dissipated, is often hotter than the air on the inside. How then, does a chiller work?

The purpose of a chiller is to cool down a fluid, which in turn can be used to cool down other things; for example the air in an air conditioning unit, or servers and other equipment.

The water in the chiller is looped through an evaporator, giving up heat to a refrigerant in a separate loop. A refrigerant is a substance with particular properties; specifically it has to have a boiling point that can be manipulated by pressure changes to match the temperature of the water the chiller needs to produce. The refrigerant evaporates, becoming gas while subtracting heat from the water in the process.

The refrigerant is then led through a compressor, a component in the chiller which increases the pressure of the refrigerant. This is the trick that allows chillers to move heat from cooler to hotter areas: the increased pressure raises the boiling point of the refrigerant, so that it will become liquid again at a temperature that is higher than the one in the outside environment. 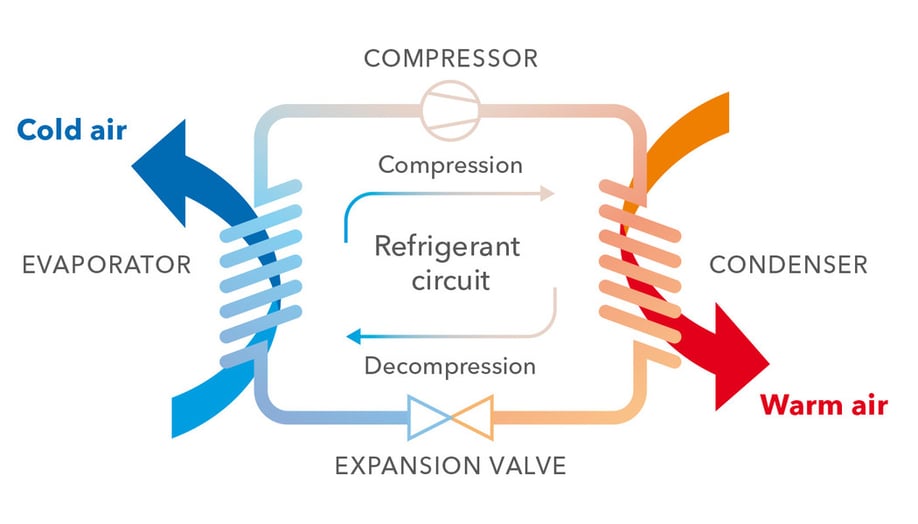 The refrigerant in its gas form is then led through a condenser, giving up heat as it becomes liquid. The heat is dissipated to the external air or to a source of water, in the case of a water cooled chiller. Next, the refrigerant is led through an expansion valve, which lowers the pressure, allowing the refrigerant to be looped again to the evaporator. And round and round it goes.

In order for this process to work the chiller needs energy to run the compressor. Also, the air and all liquids need to be moving, through the use of pumps and fans.

Fabio Polo is the product manager for data cooling and package air conditioning throughout the Swegon Group. Fabio has a solid knowledge of cooling solutions dedicated to the IT environment and he is passionate about energy saving and whole system optimization, both within Swegon and the industry as a whole.