The control of smoke and containment of fire through the ventilation ductwork in any building are just two of the many requirements for fire safety and must be designed, installed and maintained as part of a methodical, holistic and ongoing process. For compartmentation to be effective, the enclosing boundaries, such as walls and floors, must be able to resist the spread of fire and where ducted ventilation services could compromise the integrity of that compartment. The first part of creating a fire safe ventilation system is the fire dampers...

What are fire dampers?

A fire damper’s primary function is to maintain compartmentalisation and prevent, or impede, the spread of fire through the ventilation ductwork. Fire dampers are designed to allow airflow through under normal operation but are set to shut Instantly on the detection of a fire. The design of these types of dampers is to revert to and maintain a closed position in response to a rise in temperature of the surrounding area (failsafe closed). 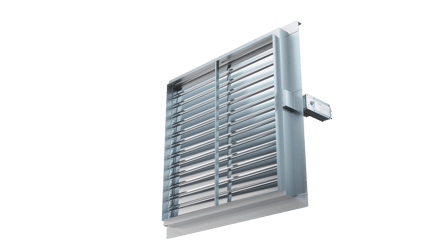 Fig 1: an example of a fire damper

What are smoke dampers?

The most significant risk for occupants in fires is smoke inhalation. So, when considering smoke and heat ventilation, an uninterrupted smoke extract path needs to be maintained between the area where heat and smoke is being generated and the outside of the building – this is facilitated through controllable smoke control dampers (often referred to as ‘smoke dampers’).

The function of a smoke control damper is to control the flow of smoke and hot gases into, from or within a duct. Smoke dampers are increasingly used as part of an active smoke control system to selectively provide a route for removing smoke from a building. Smoke dampers  can be actuated, open and closed in less than 60 seconds,by utilising external control signals from the building maintenance system (BMS) or through a dedicated smoke control system. There is no particular failsafe position for smoke dampers. Fig 2: an example of a smoke control damper

How should you control the dampers?

Fire and smoke dampers should operate on receipt of a signal when smoke is detected by a smoke detection system or suitable fire detection system. This might be through a dedicated damper control panel or building management system to control the dampers that also provides remote testing and control, in addition to (application depending) allowing firefighter's override of the dampers.

The set of rules governing which dampers open/close and how they are controlled may be developed by examining the ‘cause and effect’. So, the building is divided into zones and the zones are normally mapped – for example, into a spreadsheet – and that map is used by all parties to develop a coherent and logical fire and smoke control strategy to maximise the preservation of life.

Dedicated damper control panels are normally capable of managing complex ‘cause and effect’ scenarios. Typically, the controls can be integrated into the wider building management systems that will also allow scheduled damper testing and status alerts. Thermal protection is essential for the main control panel, interfacing electronics, network cabling, damper control panel and the damper itself.

Works on building efficiency and occupant wellbeing at Swegon UK&I.